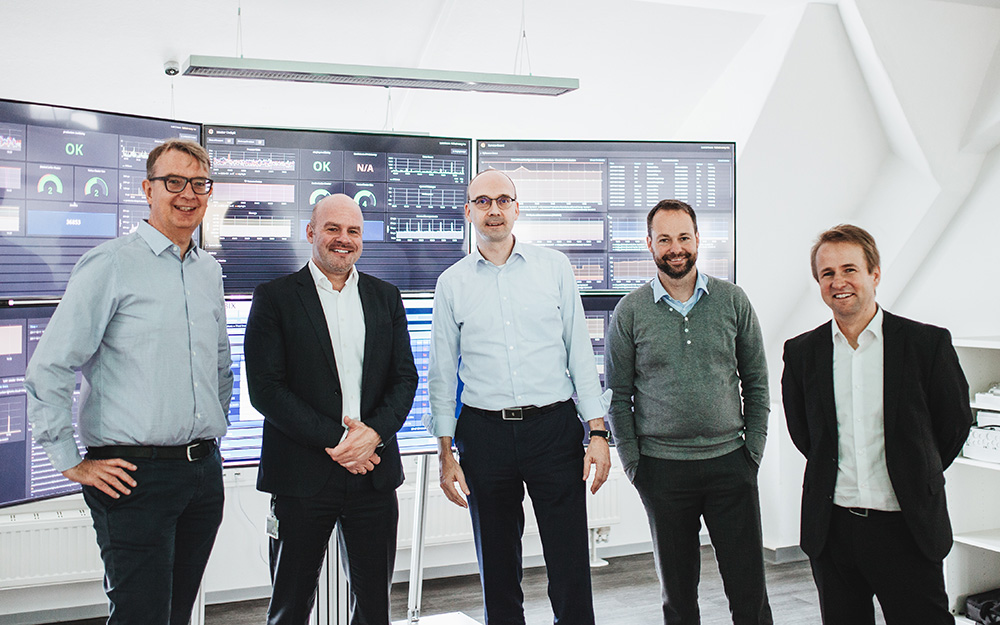 innogy SE has recently concluded a strategic group framework contract with Kiwigrid GmbH. The Dresden-based company develops and operates a modular and secure platform for intelligent energy management. Kiwigrid is one of the leading technology companies in the "Energy IoT" sector and was listed in the Global Cleantech 100 in February 2017.

The first joint projects have already started with the industrial energy monitoring system "bit. B" and the innovation project for eMobility "greenfuel". Further projects will follow in the upcoming months, including smart home solutions and the utilisation of aggregated small-scale distributed energy resources. More than 1.3 million distributed generation and storage systems are already connected to the German distribution grids. Falling prices for solar and storage technologies will accelerate this development. The energy systems are thus shifting to the end customer; value creation in the energy market is becoming more complex. In the light of this historical change of the energy industry, innogy sees great growth potential for digital energy services. The partnership with Kiwigrid GmbH will play a key role in this respect.

Martin Herrmann, responsible for retail at innogy SE: "Through its cooperation with Kiwigrid, innogy is focusing on future technology. The energy industry is becoming increasingly digital. Automation and robotization simplify processes - also for our customers."

Connecting millions of small-scale distributed energy resources to a "Internet of Things" is one of the biggest technical challenges of the energy transition. Kiwigrid is one of the world’s leading companies in this field. “Our hardware and software supports more than 1,000 types of devices from the leading manufacturers. These primarily include photovoltaic systems, battery storage and charging stations for electric vehicles, but also flexible large-scale consumers such as heat pumps and night storage heaters. On our platform we already manage more than half a million data points of connected distributed energy resources. Together with innogy, we will translate this data into scalable business models," says Matthias Hertel, Managing Director (speaker) of Kiwigrid. "In doing so, we ensure end-to-end security, including the connection of devices in buildings, our cloud infrastructure and customer applications."

Driven by decentralisation and digitalisation, the energy industry is currently experiencing another phenomenon: the convergence of electricity, mobility and heat. The energy market is thus being redefined. innogy and Kiwigrid address this megatrend by intelligently connecting the sector-specific technologies. “This is exactly what our IoT platform and software solutions enable," says Tim Ulbricht, Managing Director and responsible for Product, Sales and Marketing at Kiwigrid. “We want to help innogy to develop and market innovative energy services that cover all market roles and sectors," Ulbricht continues.

One of the first joint projects is innogy's industrial energy monitoring system "bit. B", which will be migrated to the Kiwigrid platform. bit. B "is a process and energy monitoring system for commercial and industrial companies, which complies with the DIN EN ISO 50001. The system uses retrofit sensors to collect and analyse various data such as production, environmental or energy data at individual machines or in main and sub-distributions. The main objective is to provide companies with insights to increase energy efficiency and optimise production processes. The system can be used flexibly; the customer references range from international tyre manufacturers to hotels and regional shoe retailers. Together with Kiwigrid, it is planned to extend the system with intelligent actuators to enable peak load management and PV self-consumption optimisation.

“With bit.B, our customers are provided with significantly more transparency about their business processes. The system is easy and quick to install and shows results in Euro and Cent. This has already convinced many customers," says innogy COO Martin Herrmann.

The second project is innogy's research and development project, called “greenfuel”. Among other things, the research team is working on the intelligent integration of electric vehicles into the distribution grid. Specifically, these are electric vehicles with a methanol fuel cell serving as the range extender. For this purpose, Kiwigrid has developed a bidirectional charging application (vehicle-to-home) allowing the vehicle to be charged from the solar system at home. If there is no sunshine, the vehicle can supply the house with electricity from the methanol fuel cell. Bidirectional charging based on grid conditions and complex forecasts will be crucial for the successful integration of electric vehicles into power grids.

Since the beginning of this year, innogy has held shares in the Dresden-based software company. The cooperation is being expanded with the groupwide agreement. innogy plans to launch the products developed on the Kiwigrid platform in its international markets as well.

innogy SE is one of the leading European energy companies with revenue of around €44 billion (2016), more than 40,000 employees and activities in 16 countries across Europe. With its three business segments Grid & Infrastructure, Retail and Renewables, innogy addresses the requirements of a modern, decarbonised, decentralised and digital energy world. Its activities focus on its 23 million customers, and on offering them innovative and sustainable products and services which enable them to use energy more efficiently and improve their quality of life. The key markets are Germany, the United Kingdom, the Netherlands and Belgium, as well as several countries in Central Eastern and South Eastern Europe, especially the Czech Republic, Hungary and Poland. In renewable power generation, the company is also active in other regions, e.g. Spain, Italy and the MENA region (Middle East, North Africa), with a total capacity of 3.7 gigawatts. As a leader of innovation in future-oriented fields like eMobility, we are represented in the international hot-spots of the technology industry such as Silicon Valley, Tel Aviv, London and Berlin. We combine the extensive expertise of our energy technicians and engineers with digital technology partners, from start-ups to major corporates. With planned capital investments of around €6.5- €7.0 billion (2017-2019), we are building the power market of the future and driving forward the transformation of the energy market. innogy is colourful, flexible and full of energy – let’s innogize! For more information, please visit www.innogy.com

Empowered by a unified platform serving as the future-proof and maximum secure backbone, Kiwigrid's white-labeled software solutions help utilities, solar and storage manufacturers, automotives and telecommunication companies to tap the full potential of distributed energy resources (DER) and IoT technologies. Kiwigrid’s solutions optimize the use of solar energy, pave the way for electromobility and increase energy efficiency of buildings and production facilities. Empowered by its intelligent metering infrastructure, Kiwigrid’s solutions also enable the utilization of small-scale DERs for stabilizing distribution grids and optimizing energy trading. Founded in 2011, Kiwigrid today employs more than 140 employees from all over the world. Over the years, Kiwigrid has built a vast knowledge of all aspects of energy management. Kiwigrid is one of the world's leading technology companies in these areas and was named in the Global Cleantech 100 in February 2017. AQTON SE, LG Electronics and innogy SE form a solid foundation as our strategic shareholders. In addition to innogy and LG Electronics, Kiwigrid’s customers include enviaM, Stadtwerke Düsseldorf, Lechwerke, MITNETZ Strom, Vattenfall, E. ON, BMW, SOLARWATT, SHARP, Telstra and Origin Energy. On top of that, Kiwigrid closely works with more than 50 of the world's leading manufacturers of distributed energy systems.